Bidenomics beats Reaganomics and I should know – I saw Clintonomics fail 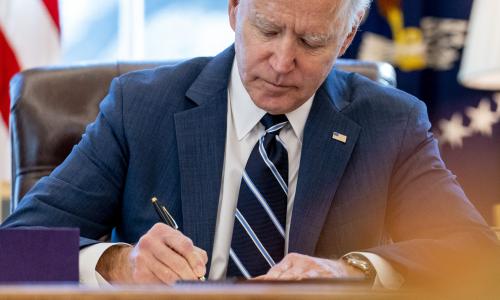 A quarter-century ago, I and other members of Bill Clinton’s cabinet urged him to reject the Republican proposal to end welfare. It was too punitive, we said, subjecting poor Americans to deep and abiding poverty. But Clinton’s political advisers warned that unless he went along, he would jeopardize his re-election.

That was the end of welfare as we knew it. As Clinton boasted in his State of the Union address to Congress that year: “The era of big government is over.”

Until Thursday, that is. Joe Biden signed into law the biggest expansion of government assistance since the 1960s – a guaranteed income for most families with children, raising the maximum benefit by up to 80% per child.

As Biden put it in his address to the nation, as if answering Clinton: “The government isn’t some foreign force in a distant capital. No, it’s us, all of us, we the people.”

As a senator, Biden supported Clinton’s 1996 welfare restrictions, as did most Americans. What happened between then and now? Three big things.

First, Covid. The pandemic has been a national wake-up call on the fragility of middle-class incomes. The deep Covid recession has revealed the harsh consequences of most Americans living paycheck to paycheck.

For years, Republicans used welfare to drive a wedge between the white working middle class and the poor. Ronald Reagan portrayed black, inner-city mothers as freeloaders and con artists, repeatedly referring to “a woman in Chicago” as the “welfare queen”.

Starting in the 1970s, women had streamed into paid work in order to prop up family incomes decimated by the decline in male factory jobs. These families were particularly susceptible to the Republican message. Why should “they” get help for not working when “we” get no help, and we work?

By the time Clinton campaigned for president, “ending welfare as we knew it” had become a talisman of so-called New Democrats, even though there was little or no evidence that welfare benefits discouraged the unemployed from taking jobs. (In Britain, enlarged child benefits actually increased employment among single mothers.)

Yet when Covid hit, a new reality became painfully clear: public assistance was no longer just for “them”. It was needed by all of “us”.

The second big thing was Donald Trump. He exploited racism, to be sure, but also replaced economic Reaganism with narcissistic grievances, claims of voter fraud and cultural paranoia stretching from Dr Seuss to Mr Potato Head.

Trump obliterated concerns about government give-aways. The Cares Act, which he signed into law at the end of March 2020, gave most Americans checks of $1,200 (to which he calculatedly attached his name). When this proved enormously popular, he demanded the next round of stimulus checks be $2,000.

But Trump’s biggest giveaway was the GOP’s $1.9tn 2018 tax cut, under which benefits went overwhelmingly to the top 20%. Despite promises of higher wages for everyone else, nothing trickled down. Meanwhile, during the pandemic, America’s 660 billionaires – major beneficiaries of the tax cut – became $1.3tn wealthier, enough to give every American a $3,900 check and still be as rich as they were before the pandemic.

The third big thing is the breadth of Biden’s plan. Under it, more than 93% of the nation’s children – 69 million – receive benefits. Incomes of Americans in the lowest quintile will increase by 20%; those in the second-lowest, 9%; those in the middle, 6%.

Rather than pit the working middle class against the poor, this unites them. Some 76% of Americans supported the bill, including 63% of low-income Republicans (a quarter of all Republican voters). Younger conservatives are particularly supportive, presumably because people under 50 have felt the brunt of the four-decade slowdown in real wage growth.

Given all this, it’s amazing that zero Republican members of Congress voted for it, while 278 voted for Trump’s tax cuts for corporations and the rich.

The political lesson is that today’s Democrats – who enjoy popular vote majorities in presidential elections (having won seven of the past eight) – can gain political majorities by raising the wages of both middle class and poor voters, while fighting Republican efforts to suppress the votes of likely Democrats.

The economic lesson is that Reaganomics is officially dead. For years, conservative economists argued that tax cuts for the rich create job-creating investments, while assistance to the poor creates dependency. Rubbish.

Bidenomics is exactly the reverse: give cash to the bottom two-thirds and their purchasing power will drive growth for everyone. This is far more plausible. We’ll learn how much in coming months.