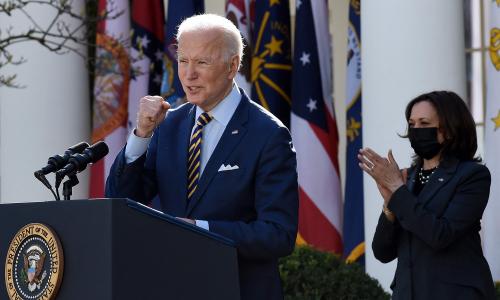 In the White House Rose Garden, where for four years Donald Trump raucously celebrated political wins with his allies, it was now the turn of Democrats to take a victory lap – masked and physically distanced, of course.

Kamala Harris, the vice-president, heaped praise on Joe Biden for signing a $1.9tn coronavirus relief bill, the biggest expansion of the American welfare state in decades. “Your empathy has become a trademark of your presidency and can be found on each and every page of the American Rescue Plan,” Harris said.

Democrats this week passed the plan into law; now they have to sell it. Friday’s event with members of Congress fired the starting gun for Biden, Harris and their spouses to mount an aggressive marketing campaign, travelling the country to tell Americans directly how the hard won legislation will improve their lives.

Salesmanship was always seen as Trump’s forte but this is a golden opportunity for Biden, a once unlikely saviour. The oldest president ever elected – at age 78 – is riding high in opinion polls. His rescue plan is endorsed by three in four citizens. His opposition is in disarray with Republicans struggling to find a coherent counter- narrative, squabbling over Trump and obsessing over culture wars.

But Biden’s long career will have taught him the laws of political gravity: presidents and prime ministers who start on the up inevitably take a fall. He has also spoken of the need to avoid the fate of Barack Obama who, having intervened to stave off financial disaster in 2009, was repaid with a “shellacking” for Democrats in the midterm elections.