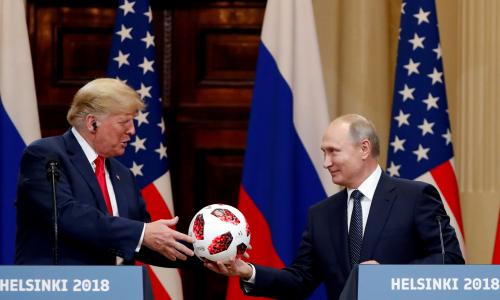 Russia tried to influence the 2020 US presidential election by proliferating “misleading or unsubstantiated allegations” largely against Joe Biden and through allies of Donald Trump, US intelligence officials said on Tuesday.

The assessment was contained in a 15-page report published by the Office of the Director of National Intelligence. It underscored allegations that Trump’s allies played into Moscow’s hands by amplifying claims against Biden by Ukrainian figures with links to Russia.

“Individuals close to the former president were targeted by agents of Russian intelligence including Andriy Derkach and Konstantin Kilimnik, who laundered misinformation into our political system with the intent of denigrating now President Biden, damaging his candidacy.”

Kilimnik has widely reported ties to Paul Manafort, Trump’s campaign chairman in 2016 who was jailed under the investigation led by special counsel Robert Mueller but pardoned by Trump shortly before the end of his term.

Derkach worked closely with Rudy Giuliani, the former New York mayor who has acted as Trump’s personal attorney, in attempts to uncover political dirt on Biden and his family which were at the heart of Trump’s first impeachment.

Biden beat Trump by 306-232 in the electoral college and won the popular vote by more than 7m. The electoral college result was the same as that by which Trump beat Hillary Clinton in 2016, despite losing the popular vote by nearly 3m ballots. US intelligence agrees that election was subject to concerted Russian attempts to tip the scales for Trump. Russia – and Trump – oppose and deny such conclusions.

The intelligence report issued on Monday said Russian hackers did not make persistent efforts to break into election infrastructure, unlike past elections.

The report found attempts to sway voters against Trump, including a “multi-pronged covert influence campaign” by Iran intended to undercut support for the former president.

But it also punctured a counter-narrative pushed by Trump’s allies that China interfered on Biden’s behalf, concluding that Beijing “did not deploy interference efforts”.

“China sought stability in its relationship with the United States and did not view either election outcome as being advantageous enough for China to risk blowback if caught,” the report said.

US officials said they also saw efforts by Cuba, Venezuela and the Lebanese militant group Hezbollah to influence the election, although “in general, we assess that they were smaller in scale than those conducted by Russia and Iran”.

Schiff said: “No matter which nation seeks to influence our political system and who stands to benefit, both parties must speak with one voice and disavow all interference in our elections. We must guard against and seek to deter all attempts at foreign interference and ensure that American voters decide American elections.”

Mark Warner, the Democratic chair of the Senate intelligence committee, said: “The intelligence community has gotten much better at detecting these efforts, and we have built better defences against election interference.

“But the problem of foreign actors trying to influence the American electorate is not going away, and given the current partisan divides in this country may find fertile ground, in which to grow in the future.”