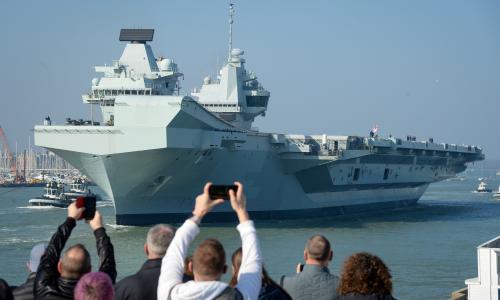 Toughen the sinews, gird up the loins. Tomorrow arrives another defence review heralded by what Boris Johnson would once have called a piffle fest. This is a concoction of abstract nouns and cliches drawn from Downing Street’s tired Archie Rice self-image as a “player on the world stage”.’ Johnson says he wants to be “match fit” against competitors, a “force for good” and a “global influencer”. He wants to be a world-beating tester and tracer of evil, a Tony Blair with adjectives. To honour this vanity, the Treasury is to end the 10-year squeeze on the defence budget and increase it by 2.6% above inflation. Nurses can eat their hearts out.

It is impossible to judge value for money here because defence is one budget that demands no audit. Any old waffle will do. Britain’s territorial integrity is not under plausible threat and has not been since the end of the cold war, or realistically since the second world war. Debate is therefore informed by abstractions such as national pride, influence and posture. The government might as well build Martello towers as submarines.

Every war fought by British forces since 1945 has been not defensive but aggressive – or, in the case of the Falklands, a matter of imperial clutter. Some, fought with the Americans, have been intended to make the world a better place, but it is hard to think of one that achieved it. The idea that such foreign wars served any British interest, when compared with lack of similar action by democracies such as Germany or Japan, is absurd. They were post-imperial illusions, and the cost has been astronomical.

Yet we will read in tomorrow’s review that we must sustain these illusions with nuclear weapons, aircraft carriers, fighter jets and desert warfare kit, so as to “punch above our weight” or “sustain our role in the world”, objectives devoid of specificity. Seized by the same nonsense, Labour will agree. It is significant that Johnson, desperate to dust his nouns with relevance, will boast of directing his spending to Scotland, Wales and Northern Ireland. Like Edward I, he is worrying about the Celts.

The additional news that Britain is to “tilt” its defence and foreign policy back to the 1950s and east of Suez beggars belief. London’s China policy is not so much chaotic as meaningless. China is laughably out of reach of British power projection. The one conceptually plausible threat to Britain’s interests is a reckless Russian leader, but confronting that is manifestly a joint European task. Because Johnson hates Europe he is snubbing it by sending a carrier to the South China Sea. This is foreign policy for schoolboys.

There are overseas dangers facing Britain, such as those of cyberwar and industrial espionage, and it is right that they be addressed by this review. That is defence properly so called, and it does not need 72,000 soldiers in tanks any more than it needs muskets, bows and arrows. The best defence of a free country in the 21st century is a robust economy, an open border and civil rights. They do need defending – sometimes against their own government – but they cost nothing.